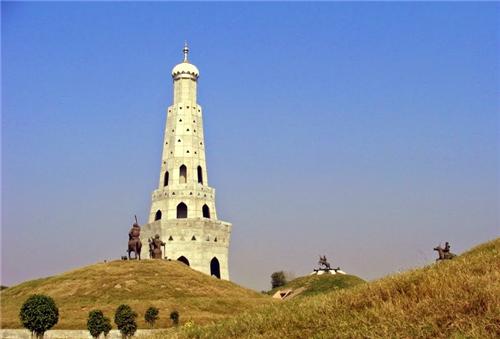 If you go through the recorded history of the Sikhs, you will come across many names or deeds, which have been forgotten by the nation. Banda Singh Bahadur is one such name. He fought relentlessly against the Mughal misrule and also against the despotic zamindars. The Fateh Minar or War Memorial at Chaparchiri is the nation’s homage to him.

Baba Banda Singh Bahadur War Memorial is located in Sector 91 in Ajitgarh, Punjab. The area is also known as Chappar Chiri. According to history, in 1710, a ferocious battle took place between the Sikh and the Mughals at this very spot. 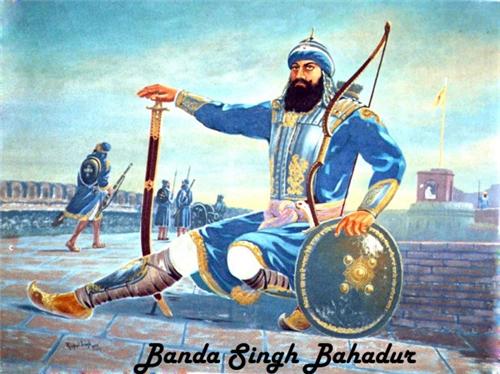 There is lot of disputes about the early life of Baba Banda Singh Bahadur. However, most scholars are of the opinion that he was born as Lachmon Das in Rajouri area of Jammu-Kashmir on 26th October, 1670. As a child he liked wrestling, horse riding and hunting. One day at the age of 16, he killed a pregnant doe. When he saw the aborted fawn seething in pain he was full of sorrow. He then left home following wandering sages.

Finally they reached present day Maharashtra and there he met Guru Govind Singhji. The Guru initiated Lachman Das into Sikhism and gave him the new name Banda Singh. Guruji also ordered him to go to Punjab and join the fight against the Mughals. Banda Sngh won many wars and thus consolidating the position of the Sikhs. His most glorious moment came when he killed Wazir Khan, who had earlier killed the two sons of Guru Govind Singh ji by burying them alive. However, he kept on fighting Mughals and thus further consolidating the position of the Sikhs.

Banda Sing Bahaur was not only a great warrior, but also a great socialist. He abolished the Zamindari system in areas under his rule and gave the farmers property right. He also undertook many other welfare measures. At last, in 1715, Banda Bahadur Singh was captured by the Mughals and was transported to Delhi in an iron cage. There he was killed after horrific torture. Even in death he remained calm and resolute.

300 years after the Battle of Chaparchiri 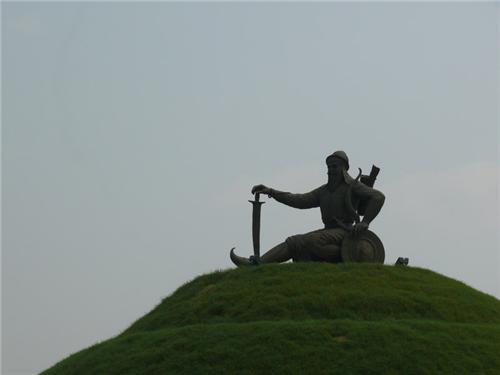 As with many other incidents, the Battle of Chaparchiri too was forgotten by the general public. To glorify the heroic deeds of Sikh soldiers and to remind us of our glorious past, the Government of Punjab decided to build a war memorial at that very spot.

The idea of building the war memorial was conceived in 2009. For that, 20 acre land was not only earmarked at Chaparchiri, but a committee, under the chairmanship of Punjabi University Vice-Chancellor Dr Jaspal Singh, was also formed. The other members of the committee were:

The objectives before the committee

The main objective of the committee was to prepare a concept paper in the light of historic perspective of the Chapparchiri Battle so that the atmosphere could be recreated at the site through landscaping as well as light and sound program. Moreover, the committee also finalized the panel of architects and the landscaping experts to be employed for that purpose

The project was thrown open to the public by the then Chief Minister of Punjab, Prakash Singh Badal on 30th November, 2011. The 328 ft tall Fateh Burj (Victory Tower) was dedicated to Baba Banda Singh Bahadur who led the army and defeated the Mughal force.

A walk through the Baba Banda Singh War Memorial 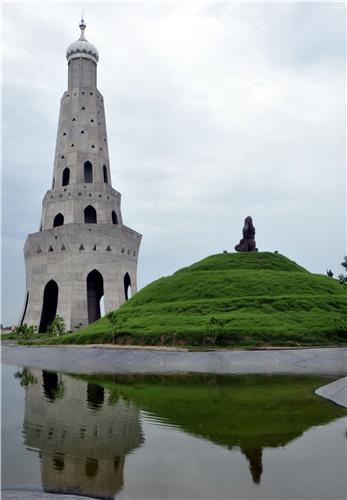 As visitors enter the complex through a fort like entrance they are taken down the lane of history. The road that leads you from here divides the land in two parts. The Sikh Army was stationed on the South East of this road while Mughal army occupied the North Western part.

Where Sikh army was stationed

The part that remained under the Sikh army has been developed with Chapar (water bodies) Chiri (Group of Trees) and Tibbas (hillocks) that might have existed 300 years ago. Six of these hillocks are dedicated to Banda Singh and his five Generals. The water body is so positioned that both the Victory Tower and the statue of Banda Singh Ji are reflected on it.

In the area occupied by the Mughals

The Fateh Burj or the Victory Tower is located on the other side of the road where the Mughal army was stationed. An open air theater with a sitting capacity of 1200 audience has also been constructed on this side of the road. The theatre also has cafeteria attached to it. There is also an air conditioned dome theatre with reclining seat for light and sound shows. 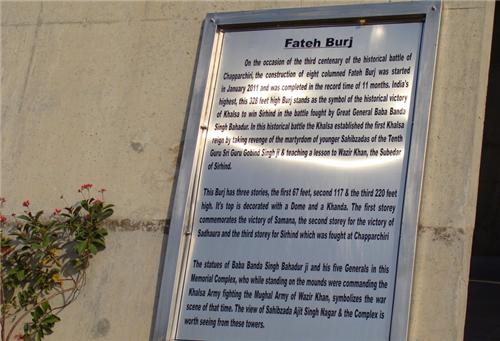 The Fateh Burj is said to be taller than the Qutab Minar. It is an octagonal structure.The core shell is upto 82.40 meters. It also has curvilinear side walls. Those are sloping upwards with arches on every side. Viewing decks have been installed at 20.4 Meter, 35.40 Meter and 66.00 Meter. These decks are approachable both by precast staircase and a lift. There is a dome at the top of the victory tower with the spire of Khanda made from stainless steel; the steel Khanda signifies the strength of the people of Punjab.

For more information you can contact the Information centre located within the premises.  Moreover, if you are ready to drive a few more kilo meters you may visit Gurudwara Baba Banda Singh Ji Bahadur. It was established in 1950 and so is more than 60 years old.