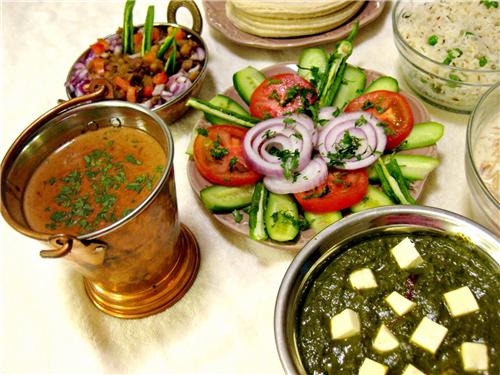 Food in Ajitgarh is predominantly influenced by Punjabi cuisine. That is because the majority of population is Punjabi by birth. At the same time, it cannot be denied that the city has now acquired a cosmopolitan outlook. If you undertake a survey of different kinds of eateries within the city, you will find that Mughlai, South Indian, Chinese and Italian dishes are as popular as home grown Punjabi cuisine.

If you truly want to sample the best Punjabi food in Ajitgarh, you should look for an invitation in a Punjabi home. There is indeed a difference between home cooked food and restaurant meals. At the restaurants, chefs often deviate from the original recipe; but at home people generally tend to stick to tradition, especially when there is a guest coming.

It is to be remembered that Punjab is a major producer of wheat and milk. That is why by tradition Punjabi dishes have good dollop of clarified butter in them. However, today many health conscious people have started using sunflower oil instead of clarified butter. Another point to remember is that, though Punjabis are predominantly non vegetarian, they also prepare many vegetarian dishes. Their Sarson da Sag and Makki Di Roti have almost become a cliché. Rajma and rice is another of their popular food made famous all over the world.

Another point to remember is that although Punjabi cuisine is more famous for its chicken and meat dishes, fish is also used extensively in different preparation. Most fishes used are fresh water variety. 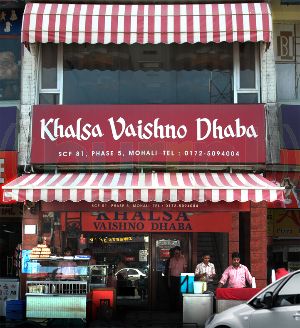 However, if it is not possible to get such an invitation, you should visit one of those dhabas that sell authentic Punjabi food at a reasonable price. However, you must remember that these city dhabas have upgraded themselves to suit the present day need and therefore, instead of charpais you can expect modern day table and chair at these dhabas. Following are few of the more famous dhabas in Ajitgarh: 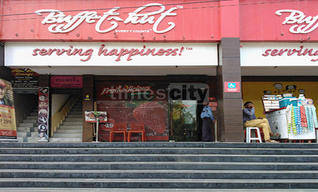 Some of the restaurants in Ajitgarh also sell delicious Punjabi dishes.  Punjabi Junction, Punjabi Haveli Restaurant, Tikka Express etc are some of them. However, if you are in mood for Mughlai, South Indian, Chinese or even Italian dishes, restaurants in Ajitgarh will not disappoint you either. Then again, if you prefer to get your food home delivered a lot of restaurants also offer such an opportunity.

Then again, some eateries in Ajitgarh does not have any dining-in facility. However, these take-away joints are no less popular either. Preet Eating Zone (94171-28257) in phase 7 is one such joint. It remains open between 12:00 noon to 03:00 PM only and if you are there during that time you will see many people standing on the pavement and savoring their nutri, chana, rajma, shahi paneer  etc with rice or kulchas.

Ajitgarh also has some fast food centre that sells variety of delicious dishes.  Apart from internationally famed Pizza Hut and Dominos, there are many local brands that sell delicious dishes. For example the Lemon Mushroom at Bhaji’s Mirchi is truly awesome. Samosa Junction, Choudhary’s Food Plaza, Virks Happy Kebab Centre etc are also quite popular among the connoisseurs. For a full list you can refer to our page on Fast Food Centers in Ajitgarh.